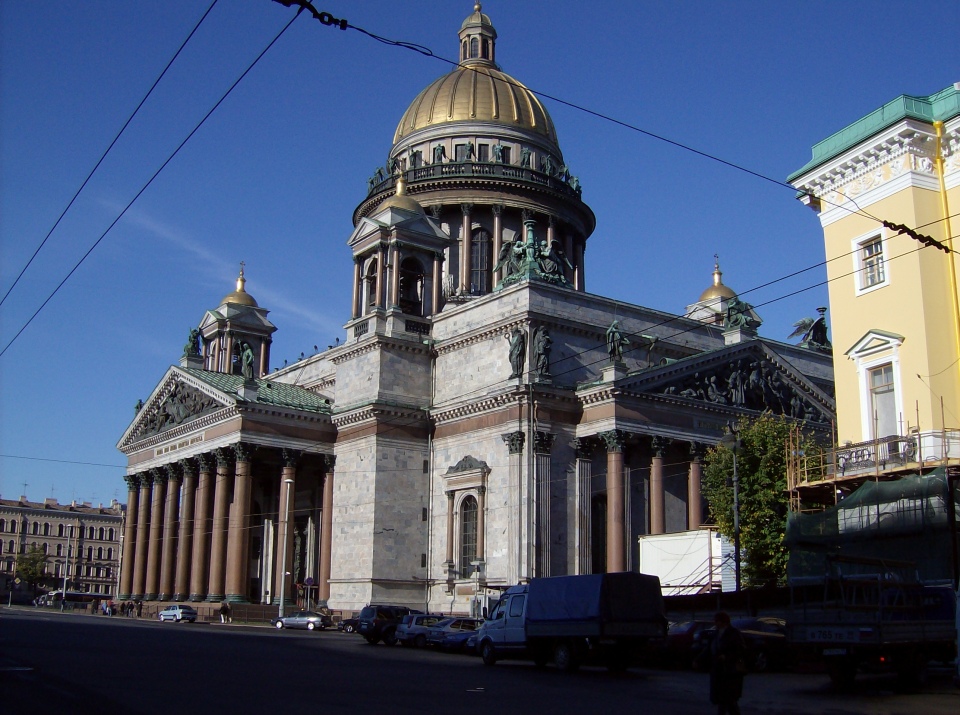 No idea what this is but it looks important.

(Note: no time to edit, forgive typos and gibberish)

For some reason, when I asked for paper, my friend’s father gave me this pad and wrote “can write!” at the top of it.  I’m not sure what he meant by that.  He also insisted, once I explained that I was writing a story about my trip (the best I could do- blog is just too much to try and explain in simple words and sign-language), that I take a second pad of paper as well.  So I think he gets the gist of why I need paper.  I still don’t understand what he meant by “can write!”.  Yet it is pertinent.  Although I cannot get to the web at will, I can, in fact, write. END_OF_DOCUMENT_TOKEN_TO_BE_REPLACED 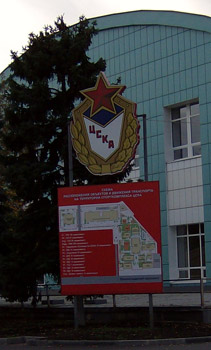 The picture I forgot to take yesterday.

Gotta get this up, tired as I am.  Great day, warm day, marathon walking day.  Tomorrow I am off to St. Petersburg where I will have no computer in house so I have no idea when I will be able to write again.  Prob don’ t have time to revise properly.  Sry:(

On my way to the rink, I ran into one of the security people I had spoken with the day before.  This one I had accosted on the overpass.  He recognized me today and said “hockey?”  I nodded, smiled (always a good idea) and said “hockey!”  He smiled back.

Probably the jerseys I have been looking for could be found easily at store.khl.ru.  That is painted all over the boards.  Will have to check it out. But had I not been hunting jerseys I would not have found the Flyers doll thingy, so no great loss, unless I measure it in water weight.

Now to my notes scribbled on postcards and a piece of paper I found wadded up in the bottom of my purse.  Someone is going to get a really weird postcard from me. END_OF_DOCUMENT_TOKEN_TO_BE_REPLACED

Just a quick note before heading out to the game.  I plan to camp in front of the rink for over an hour and ask everyone I see if there will be a game there tonight.  Or maybe I’ll get sleepy and hungry and go find food.

In the mean time, I was not going to buy another one of those silly stackable dolls, and then I saw this for sale in an underpass by Red Square. 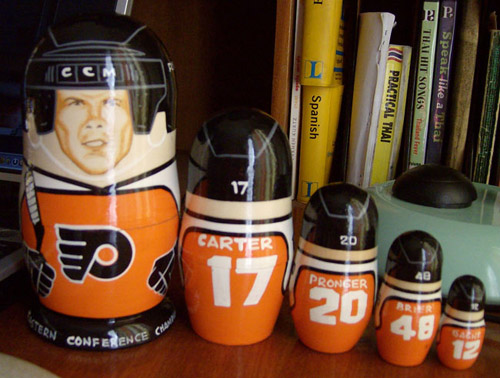 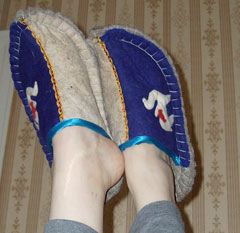 They had none in all teal, but there's a little teal ribbon around the foot.

Yesterday, before my little calamity, I bought these slippers.  The woman who sold them to me swore that they are best worn barefoot, that the camel hair soles will soothe the tired foot.  I have tired feet today.  I am testing them.

Also, they are from Kazakhstan which is cool.  Also cool, Kazakhstan seems to be doing pretty well in comparison to its neighbors, economically, at least according to my friend.  That is good, I want Kazakhstan to do well.  Also I wish I could remember how to spell Kazakhstan without looking it up. So far the slippers are very pleasant.

END_OF_DOCUMENT_TOKEN_TO_BE_REPLACED 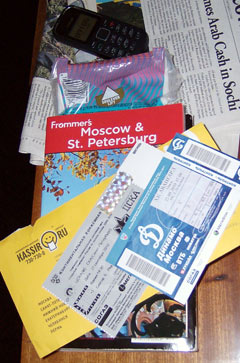 It is taking longer than I thought it would to find my way around. But here's proof I've made progress- I cropped and rotated this using Photoshop in Russian.

I am in no mood to come up with a better title.  I’m trying to not take out my frustration with myself on Moscow.  As much as I like feeling clever and being right about stuff, I really really hate feeling stupid and being wrong.  I am not even sure what I was wrong about today but I did something wrong.

The day was not a wash.  I had a very pleasant early meal with my friend and some of his friends.  One of them spoke English so I was able to keep up as much as I wanted to, which was not very much since I am still a little dazed by the fact that I am in Russia.

If you are looking for any hockey information in this post, you can go away now.  There won’t be any, which is part of why I feel stupid today.  It is also why I feel so cranky I can hardly remember the happy pleasant thoughts I had about being here, earlier in the day.  Maybe I will remember  more tomorrow. END_OF_DOCUMENT_TOKEN_TO_BE_REPLACED

After a nap and lots of perfectly legal drugs I feel much better. This is good since everyone needs to feel bright-eyed and bushy tailed at 1am.

Looked over the rosters for tomorrow’s game.  Aside from Jágr, I recognized Brendan Bell, a player that came up on my radar when I was looking into available D-men in the off-season.  He is now on Jágr’s team.  Interesting.  27, numbers not bad, good-sized fellow.  Wonder how he didn’t get picked up by an NHL team in light of this Summer’s shortage.  Oh well, he’s a Siberian now. END_OF_DOCUMENT_TOKEN_TO_BE_REPLACED

Dimitri came through.  I could have treated getting game tickets as part of my adventure.  It was, sort of.  It was a pre-adventure in obtaining that which does not want to be obtained from within the US.

I left my phone at home since it would not work outside the US.  Only later, like in DC, realized I might have wanted to make calls in DC.  I didn’t absolutely need to be all cut off like that for 18 or 20 or whatever crazy number of hours.

It also means I traveled with no clock.  That was very weird.  END_OF_DOCUMENT_TOKEN_TO_BE_REPLACED