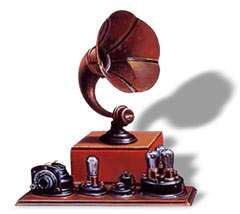 “What a save by Michael Leighton as he stoned Ben Ferriero!” the radio play by play guy shouts.

Oh my divided loyalties.  So much stress!  Well, not so much. Sorry Ben.

Got some pudding as a game time snack: rice pudding.  Leights hasn’t been so smooth lately so I thought a pudding with some lumps in it was appropriate. END_OF_DOCUMENT_TOKEN_TO_BE_REPLACED

You Never Bring a Knife…

I can’t remember what was sixy about the Kings game back in the Fall because I can’t remember the last time the Sharks won six in a row. Oh, right, they haven’t done that this season.  This Sharks team hasn’t done that before.  So this one takes the cake for sixiness.  It flat wore this fan out with white-knuckled suspense.  First, a word from Twitter:

There’s only one hat you wear to a shootout.  I recommend Stetson. END_OF_DOCUMENT_TOKEN_TO_BE_REPLACED

Much has been made of Bobrovsky needing to learn English so he can communicate with his team mates.  Hardly anyone has suggested that Zherdev’s English is in any way deficient.  But sometimes speaking English doesn’t mean you are speaking the same language.  Though lacking the more profound spiritual struggles seen in other good stories, the coming and goings of Nikolay Zherdev have the distinction of being on a par with light comedy in the style of  a Robert Bresson film.  A lot of people didn’t think Bresson’s films were funny, but they made me laugh. END_OF_DOCUMENT_TOKEN_TO_BE_REPLACED

The Sharks have won five in a row, again.  They are third in the western conference today.  They are  sixth in the league.  They are catching up with the Flyers, which confuses me on many levels.  I’m not unhappy about it, I just feel like there’s some magic math going on here.

The game against the Penguins was another experiment in asphyxia.  Light-headed as I was after that, I can think of nothing else to say about the game.  It might might have ended more quickly except that Couture missed an empty netter.  He promises to atone for that:

Oh and if I get 10 thousand followers I promise ill hit the empty net from now on. So get me some more followers!!

That made me wonder if he’d heard about Bob’s promise.  Some are harder to keep than others, but I think not missing empty nets may be more doable than not losing for a month.  Best of luck, Coutch. END_OF_DOCUMENT_TOKEN_TO_BE_REPLACED

The Best Thing to Do

Well I guess I was wrong about Zherdev and the Flyers.  I thought they would keep him just in case they could use him in the playoffs.  They didn’t.  So that was wrong.  Then I learned that Zherdev asked to be waived.  Sure, Holmgren spent some time trying to trade him first, but he was not successful.  So I guess even though Zherdev pulled the trigger, I was still kind of wrong.

No one picked him up, so I was wrong there too. But I guess I could take comfort in not being wrong about how his reputation had slipped.  No idea what happens next. Word is, awkwardness ensues. Holmgren is not distraught at the idea of having Zherdev hang around in limbo:  “…he’s pretty good insurance if one of your skill guys gets hurt. So I gotta think long and hard on that.”  -Philly Sports Daily END_OF_DOCUMENT_TOKEN_TO_BE_REPLACED

There’s been a lot of talk about Zherdev and his status in the Flyers line up.  I remember thinking he just needed time to get into the swing of things with the team, and that he had a lot to offer the team.  Now there’s another new guy, Kris Versteeg.  He seems to be making better progress and he hasn’t had nearly as much time as Zherdev has. END_OF_DOCUMENT_TOKEN_TO_BE_REPLACED

I don’t think I ever wrote about going to see a Stockton Thunder game.  Well, I did go.  I highly recommend going.  It is a nice facility, it is less expensive than an NHL game.  Parking, food, tickets, everything is less expensive.  That is important since NHL games appear to be the very most expensive sports events to attend, during the regular season.  The team colors leave something to be desired but I will forgive them that. Once upon a time I didn’t hate black and yellow.

Anyway, I wish we had an arena and an ECHL team up here in Sonoma County.  I would go, a lot. END_OF_DOCUMENT_TOKEN_TO_BE_REPLACED