The San Jose Sharks clinched a playoff spot for the tenth season in a row with a shootout loss to the rebuilding and improving Calgary Flames. Goals from James Sheppard for the Sharks and Joe Colborne for the Flames sent the game to overtime. Mike Cammalleri scored the only goal in the shootout to give the Flames the extra point.

In addition to losing the game, the Sharks lost Logan Couture after an injury he sustained in the first period blocking shots. Per Todd McLellan after the game, Couture would be fine, though he could not say if he will play Tuesday. On the positive side, Brad Stuart looked very good in his return to the lineup.

The Sharks’ power play has been a sore point for some time now, but their penalty kill has been very effective. In Calgary, it seemed to lift the team more than once and launch them on the attack after each successful kill. 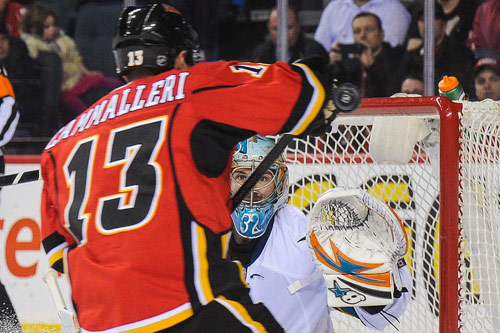 Alex Stalock faces a shot from Mike Cammaleri of the Calgary Flames, March 24, 2014 (From NHL.com)

Todd McLellan left his starting lineup much as it had been in the last four or five games, except for the return of Brad Stuart from injury. He replaced Scott Hannan on the blue line next to Justin Braun. The oft-changing fourth line was made up of Andrew Desjardins, Tyler Kennedy and Adam Burish. Additionally, Alex Stalock was back in net for the first time in five games.

1:57 into the first period, Joe Thornton was called for hooking, putting the Sharks on the penalty kill. The kill was successful but the Flames had several chances and gave Stalock an opportunity to get in the game.

At 9:56, the Sharks earned a power play when Joe Colborne went to the box for hooking. The Sharks made a ferocious start of it but Calgary goaltender Karri Ramo was very sharp and the Flames did a good job of keeping the Sharks out of his way.

The Sharks went back on the penalty kill when Dan Boyle took a hooking penalty to stop a scoring chance by Mike Cammalleri. Logan Couture and Tommy Wingels punctuated the penalty kill by blocking some stinging shots.

The Sharks killed the penalty and a post-kill line of Matt Nieto and James Sheppard broke the other way. Nieto found an open lane for a shot, which found Sheppard in front of the net. He corralled the bouncing puck and put it past Ramo. Assists went to Nieto and Dan Boyle.

Couture went to the dressing room before the period ended, and Desjardins took his spot between Nieto and Patrick Marleau.

The first period ended with the Sharks ahead by one goal, and dominating on the shot clock, 18-8.

Couture did not return to start the second period, was back on the bench by the midpoint but only took one shift before leaving again.

To begin the second, it was Tyler Kennedy on the second line, then Wingels, and so forth. A very good shift from Martin Havlat with Adam Burish and James Sheppard preceded another good shift from Desjardins, Wingels and Marleau. The forward lines had turned into a merry-go-round but the team adapted with alacrity.

Karri Ramo had to make a save on a hard shot from Dan Boyle almost midway through the second period. The Sharks had just tagged up with exceptional efficiency, and Marleau had taken the puck in and to the corner, where he was able to pass it back to Boyle in the slot. Boyle didn’t get it by Ramo but it was a reminder that the blue-liner was shooting without hesitation, always a good sign for the Sharks.

The Sharks did not occupy the Flames’ zone in the second period as they had in the first. The Flames were outshooting the Sharks 9-3 when Calgary defenseman Ladislav Smid hit Tyler Kennedy. That Sharks’ power play was possibly their worst performance in a long time, with numerous passes to the point missing the mark and clearing the zone for the Flames.

The Flames did not let up after killing the penalty, and kept the Sharks on their heels until finally Joe Colborne scored to tie the game at 18:00.

The second period ended with the game tied on the scoreboard and almost on the shot clock, with the Sharks leading only 22-20. During the second period, the Flames lead 12-4.

The Sharks started the third period with a quick penalty as Thornton went to the box for hooking just ten seconds in. The Flames power play was more effective than the Sharks’ last had been, but the Sharks’ penalty killers limited the Flames’ power play to just one shot.

The Sharks seemed to have regained their composure when Pavelski, Havlat and Wingels went on a tear in the offensive zone at the midpoint of the period. Repeated chances were thwarted by Ramo and the post, but still the game was tied.

It stayed tied and the Sharks clinched their tenth consecutive playoff spot by making it to overtime. The teams skated right through the extra period without scoring again.

Mike Cammalleri was the third Flames shooter, and the first to beat Alex Stalock in a shootout. That goal held up for the win as Karri Ramo stopped Marleau, Pavelski and Sheppard. In all, he made 33 saves in regulation and overtime. Alex Stalock stopped Joe Colborne and Jiri Hudler in the shootout and made 26 saves in the game.

The Sharks next play the Oilers in Edmonton on Tuesday at 6:30 pm PT.