SAN JOSE– The San Jose Sharks punched their ticket to the Stanley Cup Final on Wednesday, by defeating the St. Louis Blues 5-2 in Game 6 of the Western Conference Final. The 4-2 series win represents the first time the Sharks have prevailed in a conference final, the first time they will compete for the Cup. 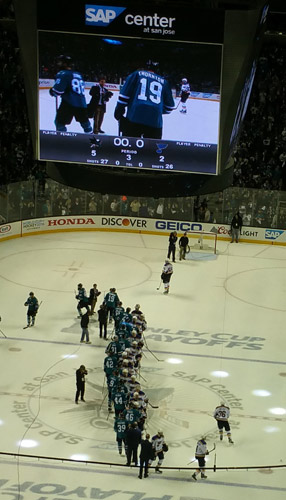 Joe Pavelski scored the first goal of the game, Joonas Donskoi scored the fourth, Joel Ward scored the two in between and Logan Couture tidied up with an empty net goal. Vladimir Tarasenko scored twice for the Blues late in the third period. Sharks goaltender Martin Jones made 24 stops for the historic win, while Brian Elliott made 22 for the Blues.

It is the third time that some of the Sharks have been to the Western Conference Final, among these is Joe Thornton. He talked about the win after the game:

It’s a pretty cool feeling. Obviously it’s our first time here so it was pretty neat to get this done at home. Fans here have waited so long, 25 years, and we’ve waited” here he turned to verify with Patrick Marleau, “18 years or so. So it’s a great feeling. And this team, we’ve always said we’ve got a deep team and we truly believe we’ve got a deep team. And you saw tonight all twelve forwards played big parts, all six D played big parts and Joner played great. This is really truly a team effort from top to bottom.”

Patrick Marleau said he does not wonder why this group has made it so much farther than previous Sharks teams:

“We’re just enjoying the ride right now. We’ve had some really good teams over the years but like Joe was saying, this team’s a little bit different. The confidence we built over the regular season and now in the playoffs. I think winning on the road helped us get close as a group during the regular season and it carried over into the playoffs so far. Just having each other’s back out there and working for each other.

Head coach Pete DeBoer said that he believed this team could get this far right at the start of the season. This, despite or perhaps because of their troubled recent seasons:

They were coming off a down season but they were coming off a decade of great hockey. They had been well coached. Todd McLellan and the previous staff are as good as there are in the business. These guys had a great foundation. Right place, right time. Everyone was ready for something a little bit fresher and newer, not anything that much different. But that and the additions Doug [Wilson, Sharks GM] made, it just came together.

“I inherited a similiar team in New Jersey when I went there. Same type of thing, they had missed the playoffs for the first time in a long time the year before I got there. I think when you go into that situation, when you have really good people like there was in New Jersey when I went in there, like there was with this group. They’re pissed off, they’re embarassed by the year they just had and they’re willing to do and buy into whatever you’re selling to get it fixed again.”

Today I heard someone suggest that the other three teams in these conference finals get more air time than the San Jose Sharks do because there is nothing controversial about the Sharks. They are not swapping their goalies around, they are not switching their lines around, their star players are not underperforming, there is no supplementary drama. They just go out and do what they are supposed to do. But for fans of this team, this playoff run has been very dramatic, very suspenseful. They may be cheering like mad in the audience, but there are a lot of fans just holding their breath through every game.

The Sharks played up to that hum-drum reputation when Joe Pavelski got credit for the first goal of the game just 3:57 in. Assists went to Joe Thornton and Tomas Hertl.

Apart from the last half minute of the period, the Sharks won the first period handily. Those final thirty seconds were getting out of hand, as the Sharks failed to clear several times and had the puck snatched away from them a few more. But they were saved by the bell and came away form the first with a 1-0 lead and a 9-5 shot advantage.

Seconds after that shot, play went the other way and the Tierney line wrought some havoc in the Blues’ zone. A Brent Burns shot went off Joel Ward’s stick for his fifth goal of the playoffs. Assists went to Burns and Tierney.

The Sharks earned their first power play when Troy Brouwer took an interference penalty early in the second period. San Jose’s power play did not convert but did bump their shot count to 13 without alowing the Blues to take a shot before close to the five minute mark of the period.

Scottie Upshall, back in the Blues lineup after sitting out the last three games, caught Tommy Wingels in the face with a high stick at 6:08 and drew blood, earning himself a double minor.

The four minutes of power play time seemed to lull the Sharks into complacency, or else it galvanized the Blues. The Blues took a couple of short-handed shots and the Sharks had more trouble getting through the neutral zone than they had previously. They accomplished the most immediate goal: of maintaining a two goal lead.

That was not enough for coach DeBoer. He used his timeout with just over five minutes left in the period. The Sharks had been scrambling and the Blues were making up ground on the shot clock. The end of the second had that in common with the end of the first: the Blues pushed the Sharks and Martin Jones had to make a few more stops. The Couture line had a good shift in the final 20 seconds but the Blues outshot the Sharks in the second, 11-10.

That second line picked up where they left off to start the third period, crowding into the Blues’ zone and making Elliott stop a shot from close in. It took them a few more shifts, but they finally caught what they were hunting: a third goal. It was only part of the Couture line. Ward was on the ice momentarily instead of Donskoi. As a result, he scored his second of the game and seventh of the playoffs. Assists went to Couture and Patrick Marleau.

The crowd went a little bit crazy. Richard Dean Anderson was shown helping duct tape Sharkie’s drum back together in one of the tunnels.

The Blues ruined the shut out with 8:21 left in the game. Vladimir Tarasenko got his first point in the series by way of a goal. Assists went to Jori Lehtera and Colton Parayko.

At 15:35, the teams were both penalized after a scuffle by the benches. Tommy Wingels (slashing) and Kevin Shattenkirk (cross-checking) both went to the box for two minutes. The Blues pulled Elliott for the additional skater and Tarasenko made a game of it with a second goal at 16:25. It squeezed through a gap between Jones’ blocker and the pipe. Assists went to Paul Stasny and Alex Pietrangelo. The Blues tried the same shot again a few seconds later but Jones adjusted.

The Blues continued to push right to the end of the period, until Logan Couture was able to put the puck in the empty net.

The Sharks will play the winner of the Eastern Conference Final in Game 1 of the Stanley Cup Final on Monday.