Home » Uncategorized » Why Won’t the Chicken Go in the Store?

Why Won’t the Chicken Go in the Store?

Over 7,000 deaths in the US now. That is a lot more than yesterday. In our county there were ten new cases today but also seven more recoveries. We were stuck on thirteen recoveries for a long time, for six days. That’s a long time in pandemic time. National news says that our stay-at-home orders are working. I hope that’s true. I hope it holds. Not only do I want our community to kick this bug’s ass, but the country will need help from places like California. They won’t get any meaningful assistance from the prez. He’s too busy settling scores and distributing the 500 billion dollar bribe Congress gave him for his friends and family. And Congress… it’s like expecting a commuter train to complete a mini-bike course. They’re not built for emergencies. This is why so many of us are being told to stay home. This is why we will have to do this for a very long time.

I never didn’t love living on the ranch. I never felt the absence of a city or close neighbors or bars I could walk to. I have always felt lucky to live here, but now I feel it more so. I am not confined to my house, or an apartment. I am not being deprived of the things I love to do. They are all here at home. I am so lucky to be able to do things like build a chicken habitat and get chickens in case the food supply chain breaks down next fall. Or sooner. And suddenly it is strange to me that I have never really considered having chickens before. I was born in the year of the Rooster. We are not in the year of the Rooster now.

I made arrangements to go get my first chickens tomorrow. Adding it to my calendar, I saw what was supposed to be a busy day. I was supposed to do a podcast and also go cover a game tomorrow. Sigh. But, chickens!

I was supposed to get my prefab chicken pen today but it did not arrive. The chickens are supposed to stay in their hen house for several days anyway, but I am peeved that I could not have everything all assembled and in place before getting the chickens. And really, these chickens might still be so young that they need to be indoors for a bit longer. I had not planned on that. I may be sharing the bathroom with them. 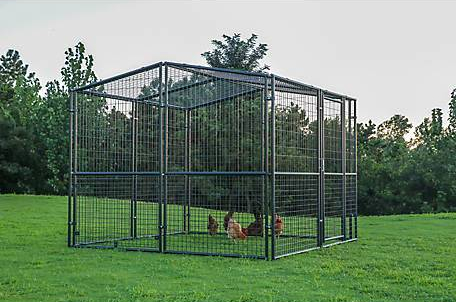 The poultry pen I’m waiting for

Still, with the roads open and no traffic, one would think that a company could meet their delivery date within a day or two. The first delivery time they gave me was yesterday, and then they said today. After that window closed, I got the call saying Monday. No wonder the country can’t get supplies where they need to be in a panic. Doing things right has just gone out of style.

Now, at least the supplier didn’t tell me that really I would have to go bid on the pen, outbid international bidders in order to get it. At least they respect that I have purchased it.

I was not satisfied with that. I called the local branch of the chain I ordered the pen from and discovered that they had one in stock. It was in the back of the store hiding under boxes and dust. I ordered that one for pick up at store. The website specifically did promise curbside pick up. So I put that order through, intending to just cancel the Monday order. But the website didn’t register my order. I called the store and asked if they had gotten the order at their end. No, they had not. The website also insisted that I had not placed any orders for the last 30 days. That was very odd. I checked with Pay Pal to see if anything had gone through. No, nothing.

I assumed everything was broken and resigned myself to having no pen until Monday. I grappled with visions of raccoons rattling the coop doors in the night, trying to get in, terrifying the little chickens. I added extra latches with thumb-dependent snaps to all the doors.

I am obsessed with curbside delivery these days. Sometimes it is the only way to get supplies without breaking the stay at home order.

I called a local building supply store last week and asked them if they were doing curbside pick-up. They said “no, we don’t have the manpower for that.” That is incredibly short-sighted of them. All these restaurant workers out of work, people needing building supplies brought out of the store and that store can’t put two and two together? And this is not a small shop, it is one of the bigger stores in the county. Sad. Some businesses are figuring it out. A smaller hardware store said yes, they would be happy to take a credit card over the phone and bring the order to the parking lot. But they do not carry lumber.

So I ordered the lumber I needed from a big chain store. I ordered online to pick up at the store. The store called me when they had the order. I asked if they did curbside delivery. The woman on the phone said yes, I just had to tell them I was doing that and they would bring something out for me to sign and so on and so forth. I called them yesterday morning to let them know I was coming to pick it up. They said great. When I got there none of the uniformed employees in front of the store had any idea what I was talking about. The young man I talked to said that the lumber exit was closed. I would have to go park (my truck and trailer in the very full parking lot), then go inside and “bring” my lumber through the store.

I explained that I needed curbside pickup. He repeated that I needed to go park and bring my lumber through the store. I ignored the proposed spectacle of me “bringing” sixteen foot long two-by-fours through the store at all, along with the six twelve foot long boards. And posts, there were posts too. I focused on the fact that he expected me to go in the store after I had been told I would not have to. Also that he told me to park in the lot even after he looked it over and could clearly see that there was no room for my rig.

I parked in the red zone, right in front of the store, on the off chance that this would draw the attention of someone in a position of authority. Staying in the truck, I called their customer service department to clear things up. The phone rang without answer for 30 minutes. Endless ringing. While I listened, I watched people milling about in front of the store, chatting and loading things. The employees standing around less than two feet apart, chatting. No one with masks, no one with gloves. I think I know why the virus is spreading faster in that town than in mine. There was no way in hell I was going to set foot in that store without a hazmat suit.

No one in a position of authority ever came to ask me why I was so very illegally parked. I would have been glad to see a cop. We are, after all, under a stay at home/social distancing order. I went home and called the chain store’s main offices and cancelled the order, after explaining what had happened. Turns out, they have no curbside pick up system. Though the store’s customer service lady seemed to know exactly how it should work, she apparently was not supposed to tell me that the store could do that.

In the end, I ordered the lumber from the local store that had just told me “no” in the first place. They charged a hefty delivery fee but at least they were honest to begin with. And at least none of this is happening to me because my state representatives have said mean things about the president. It really isn’t personal. And no one is going to die from failed lumber deliveries. Well, I guess they might if the lumber is being used to build field hospitals.