The chicken project seems to be working for me. I feel less aimlessly anxious. I still don’t find much on tv that is entertaining or holds my attention. I still let the tv show the news while I ignore it, but I am calmer.

The county seems to be hanging in there. Our new cases have dipped a touch over the past few days. Four new cases today, but seven recoveries. It seems like most of us have bought in to the social distancing program. I’m not sure how long we can keep it up but if it is working maybe enough of us will still be around to pick up the pieces of our economy.

There is a lot of celebrity hate going on because of tone-deaf attempts to amuse or soothe people with unpolished performances set in lavish homes. What did people really expect? I think there’s something refreshing about pandemic-era live tv and many of those viral videos: no makeup, no professionally styled hair, minimalist production quality. Conan O’Brian’s show with Jessie Eisenberg was kind of charming. I wanted to yell at Eisenberg that self-quarantine in a motor home is counter-productive if you are driving cross-country and stopping at gas stations. But I guess there are people doing worse things, and his reasons were legit. Anyway, it is nice to see these folks without the varnish. It is easier to listen to them. It is healthier for all of us. Maybe it will stick.

The prefab poultry pen that I was waiting for finally arrived today, five days later than expected. Despite my aggravation at the lateness, it was nice to chat with the delivery guy. From a distance, of course. With a mask on and gloves that I afterwards threw in a soapy bucket. They are still in that bucket. I felt compelled to wash them because the delivery guy needed me to help unload the pen. I had to push some buttons and handle the package. I went ahead and tore off all of the plastic wrapping before drowning the gloves. That’s what they say you should do if at all possible. Well, the best thing to do is to leave any package wherever the delivery person put it, for three days. Second best is to unwrap it and throw away the wrapping and do it all with gloves. I did not want to wait for three days before starting to set the thing up.

It was pretty easy to assemble. My pad was not level but not terrible either. All the parts were there and I had only one nut left over. I have a few finishing touches left before I will feel safe letting the pullets out of the coop but it is close. I got the chickens four days ago. They are very small, they have plenty of room in the coop.

My coop absolutely does not fit inside the pen. Well, it fits but I can’t get around and open doors and the chicken ramp. I will have to replace the chicken ramp with a door and re-attach the ramp. I should be able to do that in a couple of hours. But not today.

So the chickens. They are each unlike the other and all cute.

I do not have any more photos of them because it is very hard to catch them doing anything but huddling together. I see them scratching around and exploring inside the coop, but I only see this through the window. Can’t get good pictures through wire mesh. I really don’t know if they are okay. But they are doing what seems necessary: eating, drinking, moving around, pooping I am not entirely certain that all of them are pooping. I have not seen them do it. But I have seen them all eat and drink. And they are very alert whenever I come around. I don’t know why I haven’t put a baby cam in there yet. Live cams are great but kind of a hassle to set up.

Pandemic wise, I was reassured by the chicken pick-up process. I went to the farmhouse door and knocked with a mask and gloves. I stepped back and pulled my mask down to greet the woman at the door. She said hello and that she needed a bigger coat and disappeared again. When she reappeared, she had a bigger coat and also a serious mask with two side vents. It looked like something you would use working in a toxic environment. We managed to stay safely away from each other while she gave me a nice tour of the place and the chickens. While I was collecting my chickens, another customer came by. She also had on a mask.

I felt like these were not crazy people, not like the folks at the chain hardware store.

The first night was harrowing. Once home, the chickens did not want to leave the pet carrier I transported them in. So I took off the door of the carrier and left it inside the coop. That was around 1 pm or so. I put food and water in the coop, away from the carrier to entice them out. Some hours later I read that if they do not leave the box they came in after a few hours, you should take them out. So I rushed out there and took each little chicken out of the carrier, only to see them rush around next to the carrier and huddle again. I left the carrier inside with them. It seemed too cruel to take away their safe place.

As the sun started to go down, the food and water were still untouched. “Maybe they were cold?” A friend suggested via text message. I hung a heat lamp up at around six o’clock. It made the windows of the coop glow red. That was spooky. But the heat did bring them out, which was all wrong. They are supposed to go into some kind of comatose trance at night. The red light from a heat lamp is not supposed to be visible to chickens, so it should not have kept them awake. Still, they were chirping and pecking and scratching their way around the coop until nine o’clock. By then I had read an article that warned of chicken feathers catching fire on heat lamps, causing the whole coop to combust. So I took it out. I made sure the pet carrier was wrapped in a towel so the chickens could keep themselves warm. Yes, they were back in the carrier by then.

On the second night we had a very serious rainstorm. In response, I turned my coop from cute to ramshackle with two old horse blankets and some little curtains. I will have to improve on my storm prep. 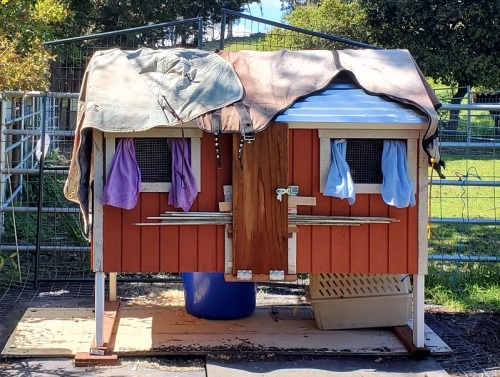 The coop after the storm.

They are still sleeping in the shavings on the floor of the coop instead of on the roost. I asked the woman from the chicken farm about this and she said they were too young to roost. Not entirely convinced, I googled it. They are still young but they should be ready to practice roosting. I googled “roosts for small chickens.” There were a few on Amazon and the design made me realize I could absolutely make something like that with scrap wood found around the ranch. The next morning, trying to figure out where to find such scraps and whether they should be square or round, I saw a walking-staff sized stick that one of the dogs had found. I am not sure why, but it was leaning against the wall in my car port, which meant that it was mostly dry despite the rainy night. I took the stick and stuck it in the coop. So much simpler than building something.

By petshark in Uncategorized on April 7, 2020.
← Why Won’t the Chicken Go in the Store? Caging the Plants →